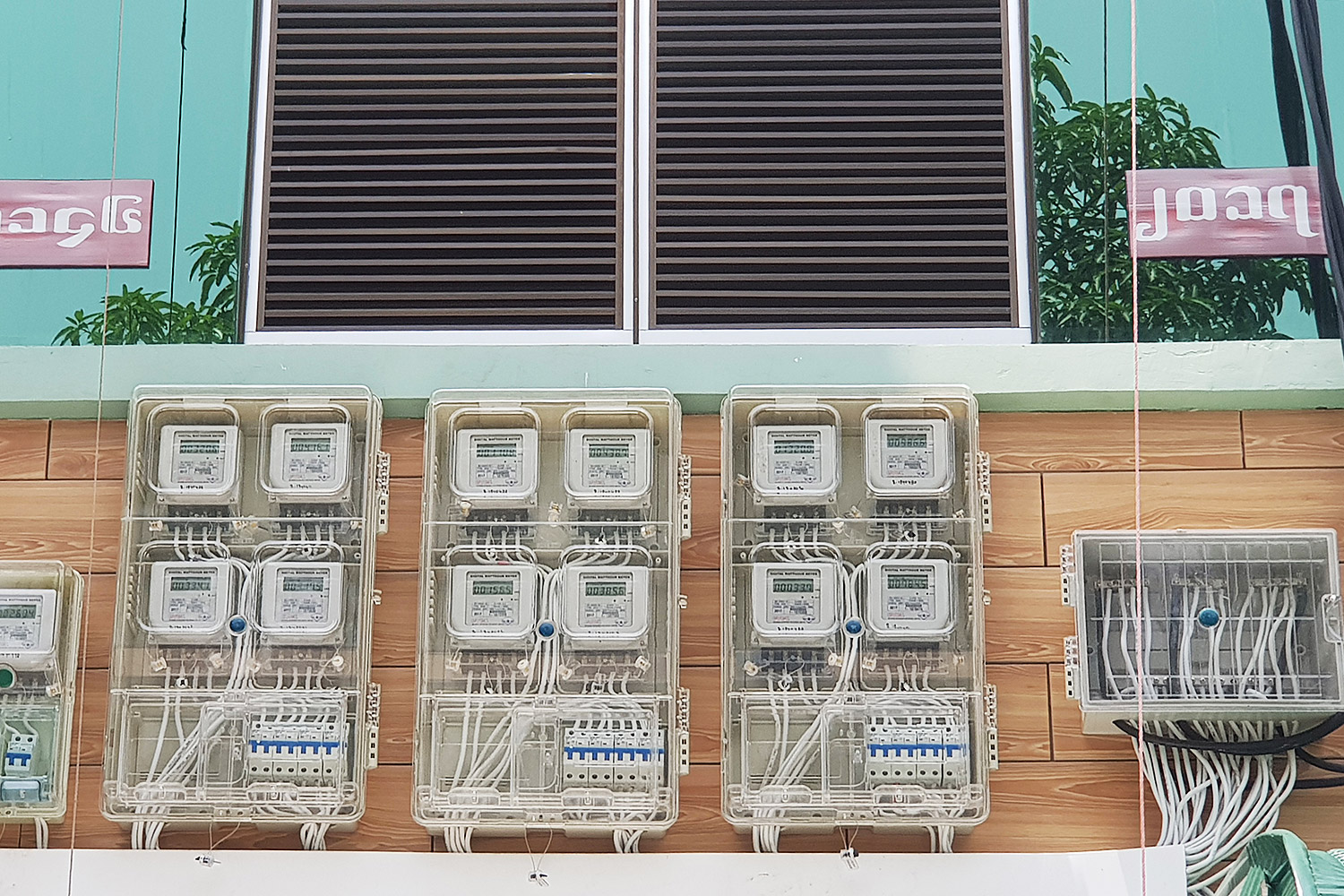 EVER meters installed at a Yangon condominium. (Photo by Larry Jagan)

Yangon is introducing smart meters to control the electricity supply, monitor usage and bill customers in a single automated system. If a pilot project is successful, the potential for further development could be huge, says the entrepreneur spearheading the technology.

“It’s a step toward making Yangon a smart city and improving and extending e-government throughout Myanmar,” says Myo Aung, who describes the project as a collaborative effort with the country’s engineering community.

“It eliminates human error and substantially lessens the opportunities for corruption,” he added. In the long run, having meters throughout Myanmar’s largest city will help promote development, reduce administrative costs and improve services to consumers and businesses.

At present the project is being piloted in two townships within the municipality, but Yangon authorities are impressed by the initial results and the savings from cutting transmission loses.

“We want to roll out these smart meters throughout the rest of the Yangon area as soon as possible,” the Chief Minister of Yangon region, Phyo Min Thein, told Asia Focus. Unfortunately, he said, the national energy ministry has been stalling on the city’s request for permission to do so.

Digital meters with advanced measuring infrastructure (AMI) have been now been introduced Daw Bone and Pabedan townships by EVER Company. All power passes through these meters, is measured and the bills prepared and distributed. Payment is through a mobile phone application called MeBill. Non-payment is also easy to detect: defaulters will have their supply automatically cut if they fail to pay within five days of receiving the bill, in line with government regulations.

The system was developed, according to Myo Aung, because of a desire to see Myanmar develop and prosper. He insists his role is as an engineering developer, hoping to inspire the next generation, and contribute to the national self-reliance.

“The technology is Myanmar,” he insists.

“Although it’s originally Israeli technology — it’s the best in the world — we have adapted it to Myanmar; everything uses the Myanmar language.” 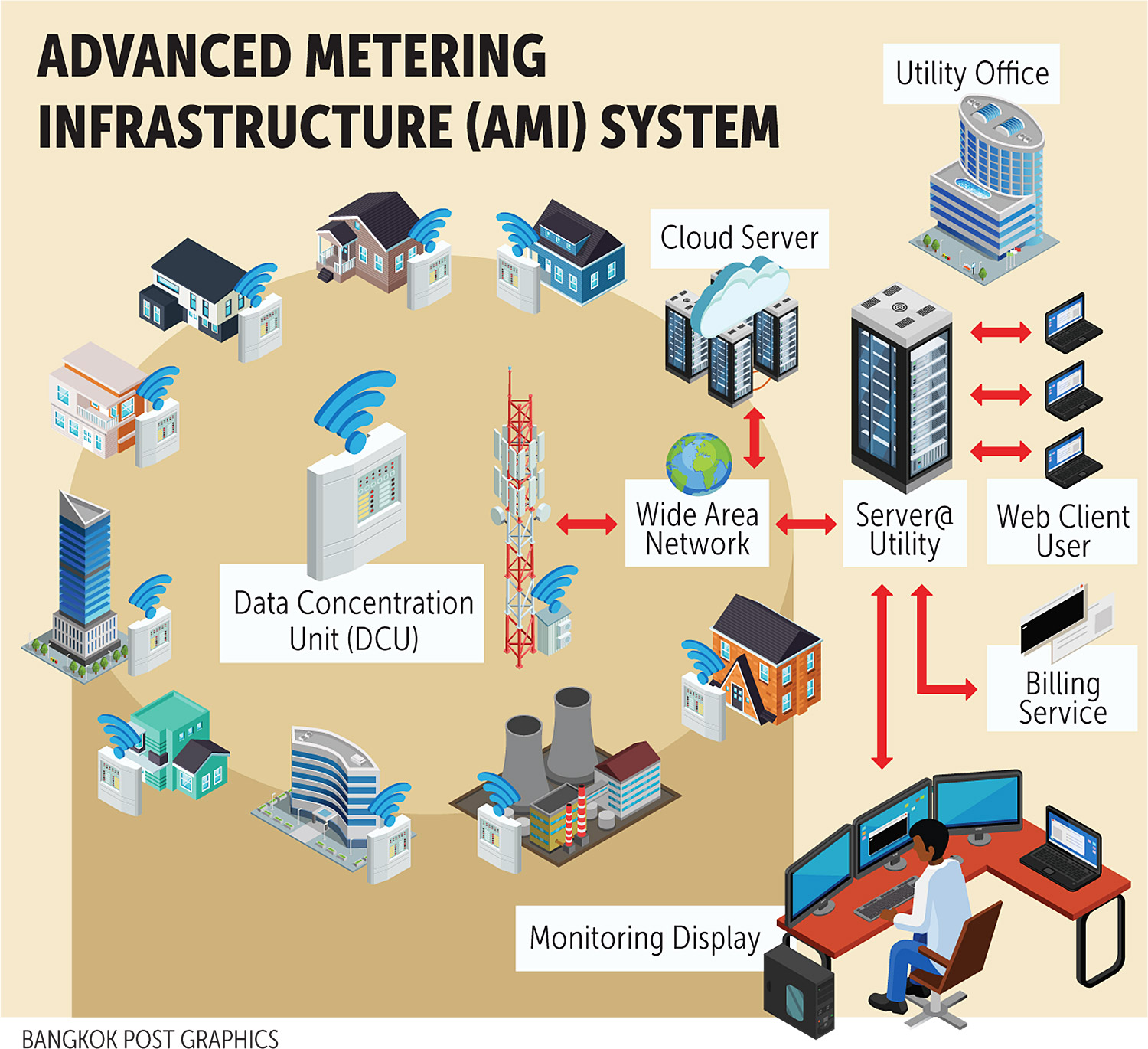 EVER has given the AMI to the government totally free of charge. “Myanmar must own its technology. … The system is potentially open to security breaches and hacking, so it must be under government control,” he said.

Yangon, and Myanmar as a whole, are currently facing a severe power crisis. In the middle of the hot season, power outages have increased significantly, with hours-long blackouts forcing many customers to rely on their own generators. However, Phyo Min Thein said he was optimistic the power supply would improve before the next peak season.

Wastage and transmission problems are endemic in Myanmar. In 2014, the country’s estimated power loss was 20.5%, compared with less than 7% in Thailand, according to the International Energy Agency (IEA). In the region, only Cambodia has a higher loss rate but its government is taking enormous strides to rectify that.

“But in Myanmar there is no concerted effort to combat this problem,” said Myo. “If anything, the authorities are being obstructionist.”

An engineer by training, he has studied local electricity issues for more than two decades. Foreign experts — some from the World Bank — have also been advising the government on a power plan. According to their analysis, Myanmar has multiple problems apart from a production deficit: transmission loss (3%), distribution losses (17%) through sub-stations, technical losses because of the need for investment (7%), and non-technical losses at the meter reading and bill collection stage (10%).

Smart meters can eliminate most of these losses, insists Myo. EVER meters are installed in every household, shop and factory in the two townships now undergoing trials. The meters are connected — via radio frequency or fibre-optic cables — to data collection units positioned 500 metres apart. These then pass the information to a cloud storage facility — for backup — and to the local monitoring unit.

The monitoring units in each township’s main electricity office also pass data to the Yangon central electricity office, where computers constantly monitored events. Problems are identified — transformer damage, transmission line failure and anything else that raises an alarm bell.

The meters prevent tampering with the electricity supply and illegal siphoning of power. EVER started installing them in 2012 and they now cover nearly half of the city area. The company guarantees the meters for 25 years, but charges for parts and maintenance after the first 10 years.

“They’re nearly seven years old and there have been no breakdowns, nil,” Myo boasted.

Meters are read manually every month, with each technician responsible for 1,000 units. In areas not covered by EVER infrastructure, there is a constant potential for inaccurate readings, inefficiency — labour-intensive and time-consuming — and corruption.

The causes, according to Myo, are lack of training, supervision and control. Then the next stage — the arduous task of compiling the readings, calculating individual consumers’ bills and distributing them — is also labour-intensive and open to even more corruption.

In the two townships in which AMI is being piloted, this has been rectified. EVER meters do everything automatically, without human intervention or error. This alone will save the municipal electricity authority millions of kyat monthly, said Myo. “Once it is rolled out in Yangon, let alone the country as a whole, the savings will be massive,” he said.

Between 2012 and 2015, EVER installed a total of 600,000 smart meters — using an adapted design created by a Korean engineering consultant. They were analogue at the time but are now being converted — using Israeli technology — to digital. The upgrade is simple and cheap — like updating an app on a phone, he explained. Nearly half of Yangon’s meters are now digital.

The original installation of 600,000 took three years and costs US$2.6 million. This did not come out of the national budget, but was funded by the savings from reduced power losses. EVER has also installed 1.5 million meters countrywide, including Mandalay. Now it is trying to get the regional government to complete the network with 700,000 more meters throughout the rest of Yangon. But while local authorities are enthusiastic, the national electricity ministry seems to be blocking the move.

“We want to install these smart meters in the rest of Yangon as soon as possible — though it will take time,” Phyo Min Thein said. “We’ve submitted our proposal to the Ministry of Electricity and Energy and are now waiting for permission to proceed.”

Completing the AMI rollout in Yangon will cost about $2.24 million, according to EVER, but it says the government will recover the cost after just three years from improvements in efficiency.

The meters are all produced in Myanmar, in the EVER factory north of Yangon. At present it is idle, Myo complained, with a skeleton staff operating it — handling hardware and software maintenance — while the company waits for the government to make up its mind to push ahead with the remaining installations.

But while the central government stalls, Yangon is losing the chance to be at the forefront of technology, which can be further expanded with the introduction of fibre-optic and 5G: this would certainly give Yangon a head start on its way to becoming a smart city

“The installation of smart meters is a crucial step in the process of making Yangon a smart city in the future,” said Zaw Naing, a digital expert and managing director of Mandalay Technology. “But we need more than talk. Starting from something feasible like smart meters for utilities — electricity and water, including electronic payment systems, which can be expanded to include taxation and toll collections.”

Still, some analysts argue that Yangon must also have a fibre cable infrastructure to capitalise on digital developments.

“An extensive fibre-optic cable network is needed to be developed throughout Yangon in order for it to become a real smart city in future,” Paul Crilley, managing director of Open Access Infrastructure and a longtime Myanmar resident, told Asia Focus in an interview.

“Fibre — the backbone or spine of the smart city — is essential for the introduction of 5G networks and services: everything from mobile and broadband to smart meters. The potential use of smart meters in every household, to provide, monitor and measure utility supplies — like electricity, gas, water and broadband — is particularly exciting,” he said.

In the meantime, Myo’s business plan is not only to meet local demand, but to export, starting with Asean where his products will be tax-free under the regional free trade agreement. There is a demand for improved sophisticated technology, he believes. The company is waiting for the result of bids it has submitted in Cambodia, Laos, Thailand and Nepal. “This export strategy will increase GDP, reduce Myanmar’s imports, and improve export earnings,” he said.

For Myo, this would be the start of the future for Yangon, Myanmar and a new role for the country’s engineering community to advance national development. “We’re looking to the next generation of Myanmar entrepreneurs and engineers, and hope to provide a lead and inspiration for the future generation.”

Such an outcome would also help to reduce the brain drain and encourage local graduates to use their skills at home. “Using our technology will boost development throughout the country,” he said. “That’s our dream.”

Myanmar: Deploy troops to help with searching and rescuing after landslide