For the raft of players who will be making their first World Cup start against Russia on Thursday opportunity knocks, but with that comes an onus to revive the squad’s spirits, performance levels and prospects of getting Ireland’s World Cup back on some kind of track.

This applies as much to those who have yet to feature at all or who have been confined to bit parts thus far. Amongst those who did their best to stem the Japanese flow in Shizuoka last Saturday was Rhys Ruddock, who is sure to feature in some guise against Russia.

“We spoke about the group as a whole having that responsibility,” said Ruddock in the aftermath of Saturday’s 19-12 defeat.

“This obviously hurts and there’s no harm in wearing it and expressing those feelings of disappointment now for the next 12 hours or whatever it is. With a five-day turnaround it’s just important that everyone takes that responsibility to bring a lot of energy, bring the focus and determination that it’s going to take to build ourselves back up for a huge game in five days and try and lift the mood, and I think that’s got to be everyone’s responsibility.”

Ireland’s elbow room in Pool A has been reduced as a consequence of Saturday’s defeat, although a bonus points win would mean another victory against Samoa of any hue would ensure a place in the quarter-finals.

Ireland also need a restorative shot in the arm and a clear signal that they have not been irreparably damaged. This is not 2007, but an ugly win, akin to those over Namibia and Georgia in the pool stages 12 years ago, would revive uncanny echoes of that strained campaign.

“Yeah, yeah, a massive game for us, and look we hadn’t really looked too far ahead of this game, but obviously we’ve been watching them,” said Ruddock of the Russians, who will make for physical and potentially sticky opponents judging on their two displays to date, especially the obdurate if limited effort against Japan. 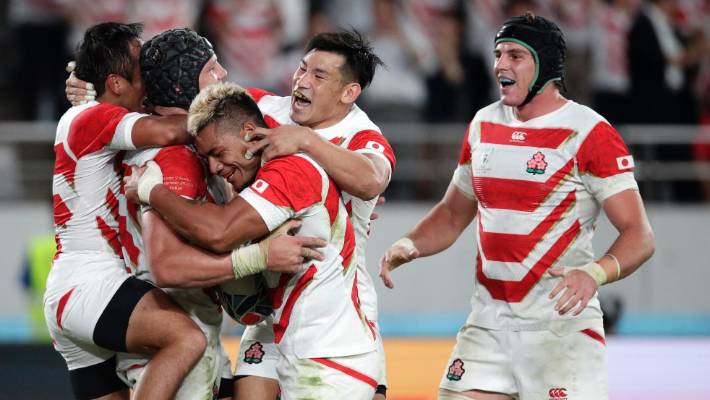 “I’ve been hugely impressed with the level of performance they’ve put in and their level of commitment. They’re a physical team and after tonight it’s even more important. It’s going to be another huge game and it’s going to test the group to see how fast we can turn this around and pick ourselves up.”

Ruddock played the last 24 minutes in Shizuoka, at which point the bench were charged with the task of trying to arrest a Japanese tide.

“I think the momentum might have been on their side. I think it wasn’t a lack of energy or effort, I think you’ve got to give credit to them. In some ways they didn’t let us have anything cheap. They fought for absolutely everything. They made opportunities for themselves and took them away from us.

“We’ll have to review it in a bit of detail, in terms of figuring out why they were on top at times in that energy and physicality, creating opportunities for themselves. But I think we’ve got to get better to be honest with you.”

A large number of iPhones have security flaws

AC Milan 1-3 Fiorentina: AC Milan is only one point higher than the relegation group