Connect with:
HomeNewsPresident Donald Trump took to Twitter to lash out at Democrats
News
author: Alice

President Donald Trump took to Twitter on Sunday night to lash out at Democrats, the whistleblower who lodged a formal complaint against him, and US House Intelligence Committee Chairman Adam Schiff.

Trump’s tweetstorm comes in response to House Speaker Nancy Pelosi’s announcement last week that the House will launch a formal impeachment inquiry, in light of a July 25 phone call between Trump and Ukrainian President Volodymyr Zelensky.

An intelligence official lodged a whistleblower complaint two weeks after the call, on August 12. The Intelligence Community Inspector General, Michael Atkinson, deemed it “credible” and of “urgent concern,” and passed the complaint on to acting Director of National Intelligence (DNI) Joseph Maguire

The complaint, which was declassified last week, alleges that Trump pressured Ukraine to investigate former Vice President Joe Biden. A partial transcript of the call has also been released by the Trump administration confirming reports that Trump pressed Zelensky to open an investigation into corruption allegations against Biden and his son, Hunter Biden.

Schiff told ABC’s “This Week” on Sunday that he expects the whistleblower to testify ” very soon” once security measures are in place to protect their identity.

Trump on Sunday night went off on Twitter, accusing Schiff of treason and demanding to meet with his accuser. 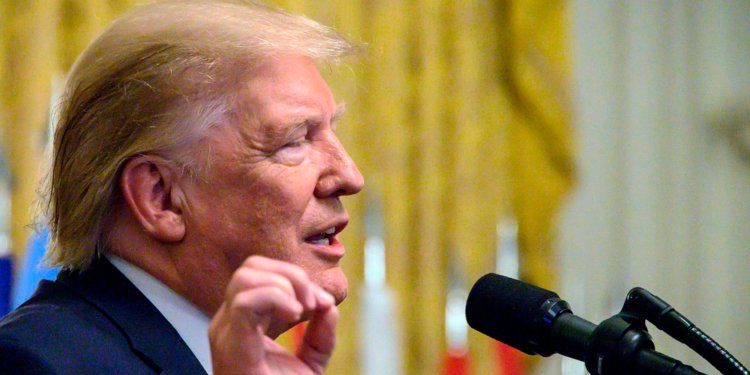 “Like every American, I deserve to meet my accuser, especially when this accuser, the so-called “Whistleblower,” represented a perfect conversation with a foreign leader in a totally inaccurate and fraudulent way,” Trump wrote.

“I want Schiff questioned at the highest level for Fraud & Treason,” he continued. “In addition, I want to meet not only my accuser, who presented SECOND & THIRD HAND INFORMATION, but also the person who illegally gave this information, which was largely incorrect, to the ‘Whistleblower.’ Was this person SPYING on the U.S. President? Big Consequences!”

In a follow-up tweet, Trump also accused Democrats of “lying & cheating like never before in our Country’s history in order to destabilize the United States of America & it’s upcoming 2020 Election.” He also referred to Democrats and the media as “Dangerous & Bad.”

Trump has denied that he said anything inappropriate during his phone call with Zelensky, and suggested on Thursday in a closed-door meeting that the whistleblower is ” almost a spy.”

Maguire testified before the House Intelligence Committee on Thursday and said that both the whistleblower and the inspector general “acted in good faith throughout” and “have done everything by the book and followed the law.”

Asian stocks went down on Wednesday over a yet-unresolved Sino-U.S. trade dispute.