Kendall Jenner is here to prove that soda cans are the next trendy fashion accessory.

On Monday, the supermodel was seen shopping at a New York City bodega, where she picked up a can of Orange Vanilla Coke, the newest flavor released by Coca-Cola. The beverage matched Jenner’s neon-orange midi dress, which she wore with a pair of bejeweled sandals from Amina Muaddi and a $1,590 handbag from Prada.

While some people loved Jenner’s matching moment, others weren’t convinced that her fashion choice was a coincidence. The model previously worked with Pepsi — and received major backlash after doing so — leading some people to question if Jenner could be sponsored by Coca-Cola and secretly advertising for the company.

However, a Coca-Cola representative told INSIDER that Kendall Jenner “is not a paid partner of the brand.”

Kendall Jenner leaves a bodega in New York City after seemingly purchasing a can of Coke.Robert Kamau/Getty Images

Jenner was seen drinking the beverage inside a bodega

According to KendallJennerCloset, an Instagram account that tracks the model’s fashion, Jenner’s orange dress was designed by Bec + Bridge, but is unavailable to purchase at the time of writing.

The account also says that Jenner wore “gold-drop earrings” from Eshvi, which currently retail for approximately $195, while drinking the soda. 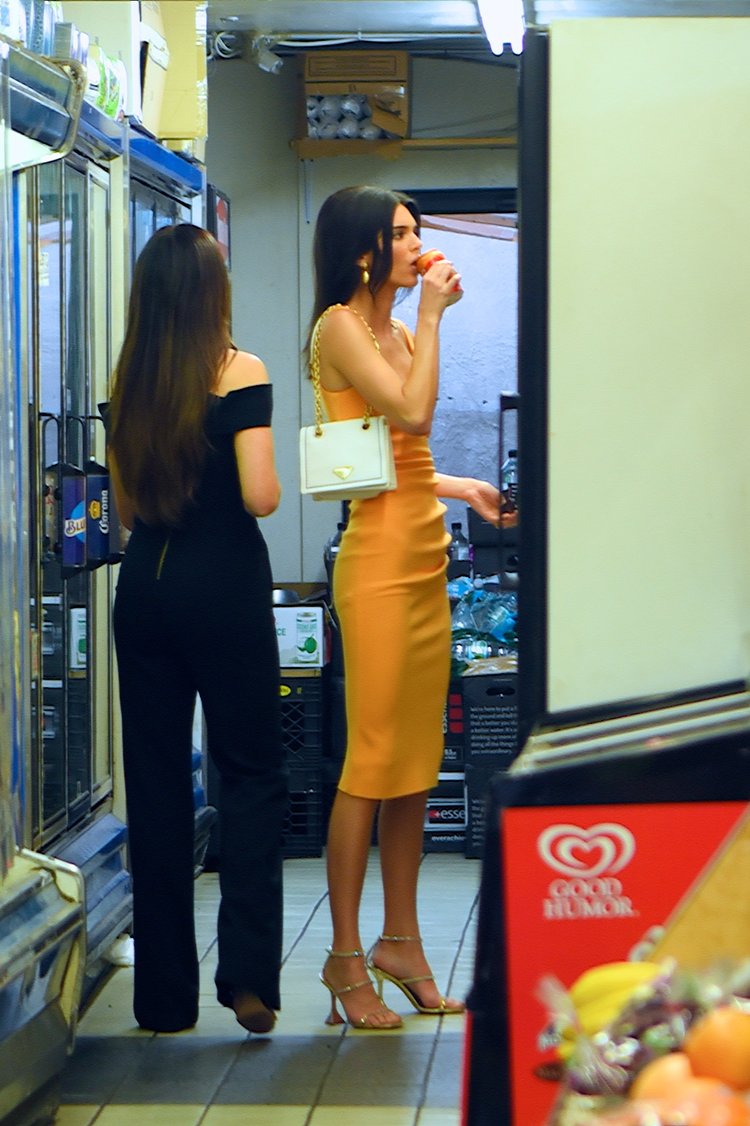 After visiting the shop, Jenner posted a photo of her visit on Instagram

The image appears to be taken from the bodega’s security camera, and shows Jenner standing against the store’s register counter.

While it’s unclear if Jenner was making a purchase at the time the photo was taken, a can of Orange Vanilla Coke that looks as though it was open was placed in front of her.

Jenner didn’t tag or mention the brand in her photo, but Coca-Cola did leave a comment on her post

“When you find a drink to complete your look,” Coca-Cola representatives commented on Jenner’s Instagram post, alongside a “100” emoji.

Not everyone was enthusiastic about Jenner’s fashion and drink choice

“Short-lived Pepsi spokesmodel Kendall Jenner made a glamorous bodega run in NYC yesterday to grab a can of Coke,” Diet Prada wrote on Instagram. “It wasn’t just any Coke though… The most recently launched Orange Vanilla flavor she chose happened to be just a couple Pantone shades away from perfectly matching her dress.”

The account also said that because Jenner did not write “#Ad” on her post, Coca-Cola could have been attempting “to skirt around the FTC’s social media advertising guidelines.”

“Surely enough, images of [Kendall Jenner] with the beverage were soon splashed over the web,” Diet Prada continued. “Was this color harmony a coincidence, or have Jenner and Coca-Cola been scheming to skirt around the [Federal Trade Commission’s] social media advertising guidelines?”

While some questioned if Jenner was secretly advertising the brand, others wondered if she ever ended her partnership with Coca-Cola’s competitor, Pepsi, which she worked with in 2017. INSIDER has reached out to representatives for PepsiCo and Kendall Jenner for clarification; both did not immediately respond to our requests for comment.

“Is this what you call two-timing? HAHAHAHA” one Twitter user wrote, who also shared a side-by-side image of Jenner drinking Coca-Cola and Pepsi.

One Twitter user also noticed that this is not the first time Jenner has been spotted with Coca-Cola products. In a recent episode of “Keeping Up with the Kardashians,” Jenner seemingly had a fridge full of Coke beverages.

According to the Federal Trade Commission (FTC), sponsored posts must be clearly labeled as advertisements

The Federal Trade Commission’s website states that “endorsements must be honest and not misleading.” Endorsements are also supposed to “reflect the honest opinion of the endorser” and cannot make any claim “that the product’s marketer couldn’t legally make.”

The FTC encourages influencers to “clearly and conspicuously disclose their relationships to brands when promoting or endorsing products through social media.”

“The FTC’s Endorsement Guides provide that if there is a ‘material connection’ between an endorser and an advertiser — in other words, a connection that might affect the weight or credibility that consumers give the endorsement — that connection should be clearly and conspicuously disclosed, unless it is already clear from the context of the communication,” the FTC states on its website.

Speaking to INSIDER, a Coca-Cola representative said Kendall Jenner ‘is not a paid partner of the brand’

In a statement sent to INSIDER, a Coca-Cola representative said that Kendall Jenner “is not a paid partner of the brand,” and that photos of her carrying the beverage are “not a paid placement.”

“We saw her photos surface at the same time as the rest of her fans,” a Coca-Cola representative told INSIDER. “We are thrilled that she’s a fan of our brand and incredibly appreciative of the insta-love. There is nothing better than drinking an ice-cold Coke on a summer day, and it was nice to see that Kendall agrees.”

In April 2017, Pepsi released a commercial starring Kendall Jenner. The nearly three-minute-long video shows young people marching for peace alongside Jenner, who is in the midst of a photo shoot.

After seeing the group marching, Jenner removes her wig and makeup, and joins the crowd. She then grabs a can of Pepsi, and hands it to a police offer, leading the crowd to cheer and end their march. The commercial was widely criticized after its release, as many people felt it diminished imagery from a Black Lives Matter protest.

The commercial was pulled one day after being released, but has since been reposted to YouTube.

“I’ve thought about it a lot because I looked at the ad again and again and again trying to figure out what went wrong — because it was a peace march not a protest march,” Nooyi told Fortune in 2017. “It was people in happiness coming together.”

She did, however, acknowledge that the commercial’s final scene is reminiscent of a Black Lives Matter protest.

“This has pained me a lot because this company is known for diversity, and the fact that everybody who produced the commercial and approved the commercial did not link it to Black Lives Matter made me scratch my head,” Nooyi previously told Fortune. “I had not seen that scene. And I take everything personally.”

Jenner also spoke out about her role in the commercial during an October 2017 episode of “Keeping Up With the Kardashians.”

“Obviously, if I knew that this was going to be the outcome, I would have never done something like this,” Jenner said.

A 2000 pound white shark jumped out of the water

15 most beautiful costumes of Kendall Jenner