Connect with:
HomeTravelMy mile high mayhem! A young flight attendant in the Eighties reveals how she saw it all – so fasten your seatbelts for a rollicking ride…
Travel
author: Helen

My mile high mayhem! A young flight attendant in the Eighties reveals how she saw it all – so fasten your seatbelts for a rollicking ride…

For a measure of how politically incorrect the Eighties were, you need look no further than the name of the Mayfair nightspot owned by footballing legend George Best. He called it Blondes.

Whatever your views on that, there was no doubting that it was a fun place to be, as this blonde discovered on her first trip to London with South African Airways.

A fellow stewardess knew some of George’s friends and one evening they sent a silver Bentley to our Kensington hotel to whisk us to his club.

We drank copious amounts of pink champagne that night, but George and our other hosts behaved like complete gentlemen throughout, which is more than can be said for many of the pilots I worked alongside in those days.

Back then, ‘pre-flight checks’ often involved the captain scouting out pretty passengers as they arrived at the foot of the aircraft stairs.

‘There’s a young lady with a high, blonde ponytail and a red dress who’s just boarded,’ he’d tell the cabin manager. ‘Ask her if she’d like to sit in the cockpit for take-off.’

You couldn’t get away with that now, and not just because the cockpit doors are kept locked. Just as society’s attitudes have changed, so too has what’s expected of airline staff. Today, there’s outrage if a passenger has one gin and tonic too many. But in my day it was the cabin crew you had to worry about.

One fellow attendant got so drunk that he exited the plane before the stairs had been put in place and stepped out into thin air, fell 12ft to the ground and lay there in a crumpled heap until an ambulance arrived. He was fired before he even left hospital.

Another big difference between then and now, of course, is that passengers were allowed to smoke. This caused great difficulties when chain-smokers were put into non-smoking seats on long-haul trips. Once, when I tried to stop a disgruntled passenger sneaking into the loo for a quick puff, he offered to put his cigarette out in my eye.

I joined South African Airways in 1983, when I was 22, and was with them for ten years. Although I’ve since had a successful career in event management and am now married with two grown-up children, I look back fondly on that era, when passengers wore suits, hanky-panky abounded and stewardesses needed nerves which, like the cutlery, were made of steel.

Lust is in the air 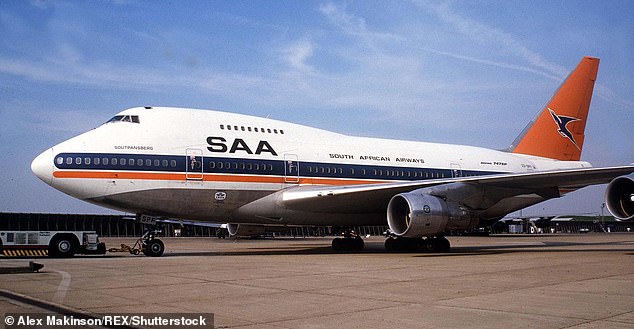 Gretchen joined South African Airways in 1983, when she was 22, and was with the airline for ten years

Before every trip, we were weighed to ensure we could squeeze into our tight-fitting pencil skirts. We were also scrutinised by a ‘check hostess’ who insisted on chignons pulled tight enough to make us the envy of today’s Botox brigade, plus so much make-up that I usually resembled one of the more exotic African lizards.

Even then, we were often outdone by the passengers. People still dressed up to fly back then and, in those days, before the striptease acts now enforced at security, the only passengers removing their clothes were volunteers for the Mile High Club.

My first experience of dealing with those who became amorous at altitude came on a night flight to Lisbon. We called business and upper-class passengers the ‘Haves’ and ‘Have Yachts’ and the couple concerned were a man and woman in the ‘Haves’.

They began the flight as strangers, sitting in different seats and keeping themselves to themselves, but numerous drinks later they were leaving little to the imagination. Their lovemaking only came to an end when my colleague Pieter shook the woman concerned by the legs and she sat up, her hair wild and her clothes dishevelled.

‘Would you like something to drink?’ he asked pointedly, with three of us lined up behind him and peering at her. 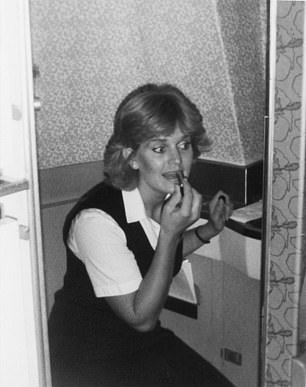 London was always my favourite destination, despite the nail-biting occasion when we encountered a technical problem after take-off from Heathrow. We needed to return to the airport pronto, but the plane’s full tank of fuel made it too heavy to land safely and air traffic control responded unhelpfully to our request to dump any, given our location right above Windsor Castle.

‘Permission denied. The Queen is currently in residence.’

The pilot wasted no time: ‘Ask the lady if she would like just the fuel, or if she would prefer the whole damn plane.’

Such problems were highly unusual, but I had my share of alarmingly heavy landings. Once, when a co-pilot’s first landing saw us slamming into the Tarmac at an airport in South Africa at such a rate that every single oxygen mask dropped out of the panels above the passengers’ heads, I wasn’t sure whether we’d landed or been shot down. The captain’s attempts to calm everyone’s nerves weren’t terribly helpful, either.

‘Ladies and gentlemen, any landing you can walk away from is a good landing,’ he announced over the PA.

No one flies halfway around the world for a cup of cocoa and an early night, and on our trips away from home we often rounded off a long evening’s drinking by decamping to someone’s hotel bedroom for an aeronautical version of strip poker.

Called ‘Feathers’, this involved forming a circle around a bedsheet, pulled taut by everyone’s hands, and placing on it a feather taken from a pillow.

Everyone started blowing furiously and whoever the feather fluttered closest to was required to take off an item of clothing. I was something of a lightweight when it came to drinking, but some of my colleagues appeared to believe that a balanced diet consisted of a bottle of wine in each hand. 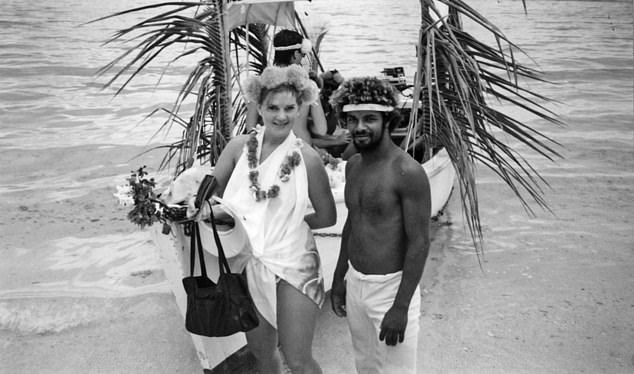 Flying visit: Gretchen seen mingling with locals after touching down in Mauritius

As for inebriated passengers, to ‘Rhoda’ somebody was airline parlance for popping a quarter of a sleeping tablet into the drink of an unsuspecting drunk and disorderly passenger — I have no idea where the term came from.

At other times we just went for revenge. One man irritated me even before take-off, constantly interrupting the safety demonstration to ask for drinks. By the end of the flight, he’d pushed the call button so often that we resorted to a tactic then employed by many airline crews around the world.

This involved the captain radioing ahead to the airport, warning of a ‘suspicious’ passenger and adding that it might be worth subjecting him to an intimate body search on his way through customs.

On my maiden flight, out of Johannesburg, the captain told me, in full hearing of his co-pilot, that I was the first pregnant air hostess he’d ever flown to Cape Town.

‘But Captain,’ I spluttered, ‘I’m not pregnant!’

He raised his eyebrows suggestively, gave me a lascivious grin and said: ‘Ah, but we’re not in Cape Town yet.’

I fled from that cockpit faster than it took a pilot to remove his wedding ring, but not quickly enough to miss the gruff laughter that followed. I should have learned my lesson, but I went weak at the knees when the captain on another flight winked at me as I brought him and the rest of his crew cups of tea. 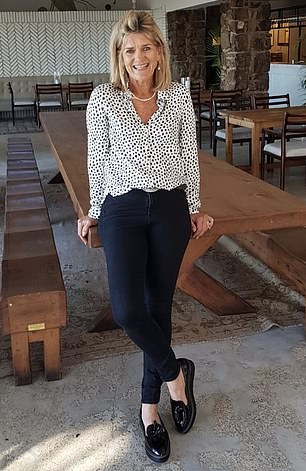 Gretchen (pictured today) is the author of Secrets Of A Stewardess: Flying The World In The 1980s

I’d dreamt of marrying a pilot, so perhaps this was my intended.

‘Gretchen,’ he said, his sunburnt laughter lines crinkling slightly around his steel-grey eyes. ‘I bet you 100 rand that I can touch your boobs without you feeling it.’

That was only about £5, but of course the money was irrelevant. What mattered was that the man who might be my future husband was flirting with me, so I played along and closed my eyes, only to feel him vigorously fondling my breasts.

‘Hey, I felt that!’ I screeched, pulling backwards and almost flinging myself right through the cockpit door.

‘OK, you win. Here’s your 100 rand,’ he said, pretending to reach for his wallet. So much for romance with a flying ace.

Gretchen Ryan is the author of Secrets Of A Stewardess: Flying The World In The 1980s, out now (The History Press, £9.99).

Desperate attempts to curb a drug-resistant germ that thrives in hospitals: Dozens of doctors meet with the CDC to work out how to keep beds clean and save lives

A hotel has a concept like a storybook in Provence

The awesome floating bar in Fiji

Do you want to try sleeping in a bubble?

China’s first airport shuts its doors in Beijing after 109 years.

The Underwater Museum – A amazing project in Mexico