Lewis Hamilton claimed his 82nd Grand Prix win with victory in the Russia GP Sunday after Ferrari’s challenge imploded amid a row over team orders. Hamilton led a Mercedes one-two in Sochi to increase his title lead over teammate Valterri Bottas to 73 points with 130 points remaining, a sixth world championship crown firmly in his grasp. Ferrari’s Charles Leclerc finished third, unable to capitalize on his fourth straight pole position and his team’s apparent dominance. 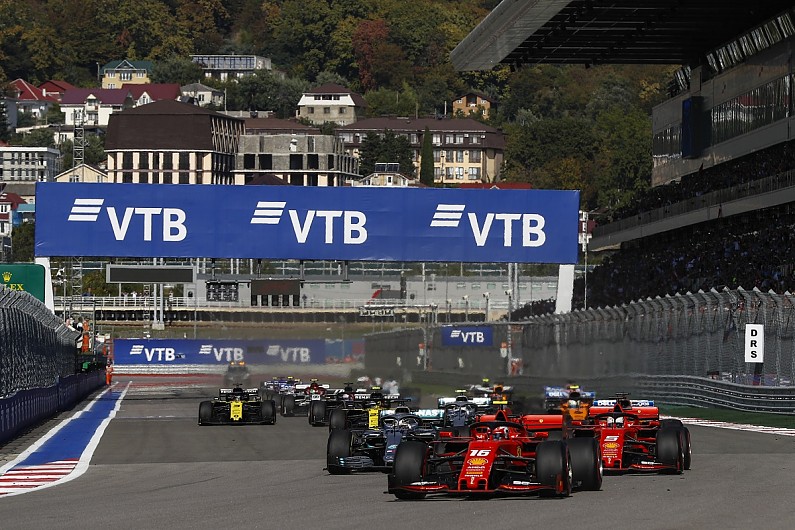 “What an effort, guys,” said a jubilant Hamilton on the radio after taking the checkered flag for the ninth time this season. “What an incredible job. That is exactly what we needed. We never give up.” It looked an unlikely victory after the British star had been relegated to third place from the start with Sebastian Vettel charging through on the slipstream to take the lead from teammate Leclerc. It became clear that pre-race team orders had been agreed that if Vettel benefited in such a way he would move over to concede the lead to Leclerc. But four-time champion Vettel was not playing ball and continued at the front, both pulling clear of Hamilton, who was on the slower medium tire. Under pressure to make way, Vettel responded: “I would have got him (Leclerc) anyway.”

Leclerc protested over race radio: “You put me behind and I respected everything,” he said. “We will talk later.” Any leftover tension in the Ferrari camp after the previous round in Singapore, where Leclerc was left smarting by being undercut by Vettel during a pit stop round, was being brought very publicly to the fore, but it would get worse for the team. Vettel was kept out on older tires for a few extra laps, allowing Leclerc, who had pitted on lap 22, to eventually get ahead of him after some fast laps on his new rubber.
Hamilton kept plugging away in the lead on his medium tire, gambling on a later stop, but good fortune was to come his way as Vettel’s car broke down with engine failure, prompting a virtual safety car while it was retrieved. Hamilton took the opportunity to pit from the lead for his new tires and suddenly Ferrari and Leclerc was in trouble. A full safety car when George Russell crashed his Williams followed and Leclerc was pulled in to make a further tire change, but it dropped him to third behind Bottas.

Lewis Hamilton
With 20 laps remaining he made several moves to overtake the Finn, but with both Mercedes running strong in the later stages he finished a frustrated third.

“It’s good to be back on the podium. It’s a shame not to have the second car here too,” he said.

“I will always trust the team but the tactic was me giving the slipstream to be one-two at the end of the straight which happened, but I don’t know… I need to speak with the team to know better the information,” he added pointedly.
Behind the Ferrari-Mercedes battle, Max Verstappen finished fourth for Red Bull, but has conceded third place in the title race to Leclerc. The F1 season moves to Suzuka for the Japanese GP in a fortnight with Hamilton and Mercedes closing fast on the individual and constructors’ titles after this latest result.
Source CNN News

Niki Lauda was ‘racing with me’ during Monaco win, says Lewis Hamilton