Connect with:
HomeStoriesHow we met: I was lying there thinking, ‘She’s drugged me!’
Stories
author: Helen

How we met: I was lying there thinking, ‘She’s drugged me!’

Paul Challen, 56, a park ranger, and Christine Kershaw, 55, who works for a winery, live in Tasmania. They met in 1993 while travelling

After his first night sharing a room with Christine, Paul was relieved to wake up and find she had not drugged and robbed him. “That first evening was when Christine …” He pauses, turns to her and says: “Well, you say it.”

“I purchased a whole lot of hash,” says Christine, matter-of-factly. “I rolled a joint for Paul, who hadn’t smoked for a little while. And it affected him. I had no idea what he was going through.”

Paul remembers not being able to get up. “I couldn’t move. I was lying there, thinking: ‘I think she’s drugged me – it’s my own fault. Whatever happens, I can’t do anything about it. I’m just going to have to hope for the best.’ In the morning I woke up and all my possessions were still there and Christine was still there.” Did he really think Christine was planning to rob him? “Well, yeah. I thought that was a possibility because I thought she’d drugged me.” And Christine laughs: “I did drug you.”

They had met earlier that day. Both had travelled by bus all day to Chitral, in northern Pakistan. Christine noticed Paul because he was the only other westerner and “because he was on the back seat of the bus with a man holding an enormous rooster on his lap”. Paul didn’t notice Christine because she was dressed like a local. When they got off the bus, Christine approached him and asked if he wanted to share a room. 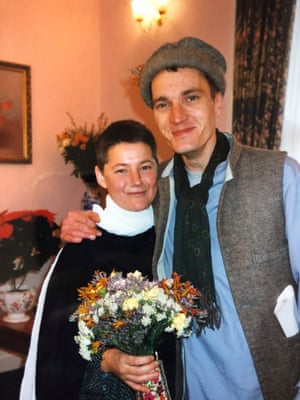 Paul and Christine on their wedding day. Photograph: Provided by Christine Kershaw

“I thought: ‘It’s nice to share your room,’” she says. “Particularly, as a woman travelling alone, if you could hang around with a male friend it was helpful.” Paul was pleased to be able to spend time with someone he could speak English with.

Paul, then 30, from Brighton in Britain, had been making his way overland from London to New Zealand. Christine, then 29, was from Melbourne, Australia, and was also travelling alone, coming from China to Pakistan. They spent the next month travelling together through northern Pakistan. “I became very attracted to Paul in that month,” says Christine. “It was a real infatuation from my point of view. I think Paul was more blase about it. You’ve got to think of the setting as well – northern Pakistan is absolutely stunning.”

“We weren’t what I would call in a relationship,” says Paul. “It wasn’t until the second time when we met back up again …”
“We had moments within that month, towards the end,” Christine points out, and the man who is now her husband says: “Did we?”

“It was very romantic,” says Christine. “It was a stunning setting. He had tousled blond hair, beautiful eyelashes, long delicate fingers, very kind eyes.” What does Paul remember about Christine? “Christine had no hair – she had a shaved head. I would never have expected to find a woman travelling alone in those areas. She was like no other woman I’d met. I hadn’t had a lot of relationships, but the girls back home weren’t like that – they wanted to stay at home or go to Spain for a holiday. Here was Christine, with a backpack and tough-as.”

After a month they parted, but promised to meet again in Kathmandu, Nepal, in a few months, corresponding through the poste restante mail collection service. Christine spotted him the day before they were due to meet, but didn’t approach him. She laughs. “We were separated for so long and you kind of get used to travelling alone again. I was like: ‘Do I want to hook up again with this guy?’” But she kept to their meeting, and they did the Annapurna Circuit trek in Nepal together, and became a couple. They spent another few months travelling together until Christine had to go back to Australia. Paul went back to London to arrange an Australian visa for himself, but then Christine decided to come to the UK.

They got married in Bow, east London, within a year. When Christine was pregnant with their first son – they have two – they moved to Australia and now live in Tasmania. “I was going on this adventure and Christine was on her own adventure,” says Paul. And they became part of each other’s.

The study revealed a ‘significant degree of distinctive partner similarity’

Why women with postpartum depression choose to suffer in silence

I’m 60, but my friends’ husbands keep hitting on me. How can I stop them?

My ex was charming but very critical. Now I’ve lost all my confidence