Connect with:
HomeHealthDesperate attempts to curb a drug-resistant germ that thrives in hospitals: Dozens of doctors meet with the CDC to work out how to keep beds clean and save lives
Health
author: Helen

Desperate attempts to curb a drug-resistant germ that thrives in hospitals: Dozens of doctors meet with the CDC to work out how to keep beds clean and save lives

Health officials are pulling together across the US in a desperate attempt to stem the spread of the fungal infection Candida auris is the latest drug resistant germ to materialize in the US, sickening hundreds in urban areas.

Candida auris is a comparatively new threat, emerging just a decade ago in 2009, in a milder form in Japan.

A type of yeast, the fungus spreads in hospitals, nursing homes and other healthcare settings and is developing drug resistance to the only three drugs to treat it faster than health officials can even track the infections.

So far, 12 states from coast to coast have had confirmed cases of Candida auris, which has spread with particularly speed in New York, which has had more than half of the nation’s infections.

Some are even calling for the federal government to declare a national state of emergency and fund better containment of the fungus.

Health officials there are scrambling to contain what the Centers for Disease Control and Prevention (CDC) have deemed an emerging health threat, but without stricter guidelines and screening, the fungus will only get more deadly. 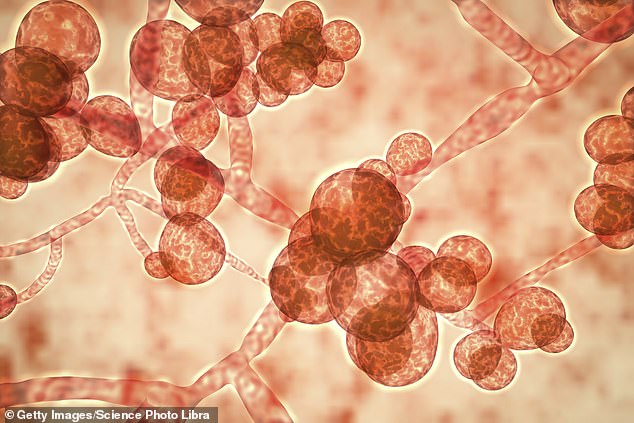 Candida auris (pictured), a life-threatening fungal infection is striking Americans in 12 states and developing resistance to drugs to treat it at an alarming rate, health officials say

The state has seen more than half of the 613 reported cases, but the fungus is spreading, prompting concern and action in the other 11 states with infections and beyond.

On May 9, New York Senator Chuck Schumer called on federal officials to declare a national state of emergency and allocated millions of dollars to developing better strategies against Candida auris.

‘Every dollar we can use to better identify, tackle and treat this deadly fungus is a dollar well spent,’ Schumer said at a Manhattan press conference, the New York Daily News reported.

Some estimate that as many as a third of people who with the fungus die.

Though infections are more rare, fungi are everywhere in the environment, just like bacteria.

For the most part, they are harmless, but if a fungus finds its way into the body through a cut or sore, it can infect the bloodstream, brain or heart and potentially turn lethal.

Doctors sometimes struggle to diagnose fungal infections, in part because their symptoms are little different from those of bacterial infections.

Importantly, ‘this is not a disease of healthy people,’ says Dr Tom Chiller, the CDC’s chief of mycotic diseases says.

‘It’s a disease of some of the sickest of the sick, it’s getting into people who are already medically really [vulnerable].’

Candida auris is opportunistic, attacking those whose immune systems are already weakened.

It can cling to bed sheets and even walls as well as medical equipment. It may travel into a patient’s body along breathing or feeding tubes or IVs.

Experts are sure the disease spreads this way – riding along with supplies and equipment – but suspect that Candida auris can also be transmitted via person-to-person contact.

Containing the fungus is not so different from containing any other infectious pathogen.

‘We need to make sure our cleaning techniques [are consistent] and that in dealing with these patients, it’s being done so that hand-washing and contact precautions are being carried out at all levels of the healthcare structure,’ says Dr Chiller.

He says his agency is working with state and local officials and responding ‘aggressively,’ though tracking the spread of Candida auris presents some challenges.

Candida auris has the ability to develop resistance and has developed mechanisms to survive. ‘It’s at least starting to figure that out, and that’s obviously concerning.
Dr Tom Chiller, CDC chief of mycotic diseases

‘Part of being aggressive is better reporting or at least identification [of the fungal infection] so it gets reported somewhere and we can all take appropriate actions and do so as quickly as possible,’ says Dr Chiller.

‘It’s also hard to kill on surfaces and you need a really strong disinfectant because normal ones don’t work against it so we need to be upping our game in the use of disinfectants that allow us to control, contain and kill the fungus in hospital environments.’

That kind of efficiency is crucial because the fungus is smart, so to speak.

‘Candida auris has the ability to develop resistance and has developed mechanisms to survive,’ says Dr Chiller.

‘It’s at least starting to figure that out, and that’s obviously concerning.’

There are really only three antifungal medications in the US, so it doesn’t take long for a fungus to become wholly drug resistant.

‘Some are pan-resistant and those need to be isolated and stopped and we need to try to prevent them from developing,’ he says.

Neither the CDC, other nation’s health officials or any of the 12 affected states have been able to work out where the fungus came from, or how exactly it has spread from state-to-state.

Unlike most fungi and bacteria – including other Candida species – auris likes to ‘hang out on the skin’ instead of in the gut, Dr Chiller explains.

In addition to the 613 people infected with Candida auris, another 1,123 patients are colonized, meaning that they carry the fungus on their skin, but aren’t infected.

These individuals may still be able to spread the fungus.

In one manner or another, the fungus has now reached coast to coast, with cases reported in New York, New Jersey, California, Connecticut, Florida, Illinois, Indiana, Maryland, Massachusetts, Oklahoma, Texas, and Virginia.

‘At the federal level, we work with the Council of State and Territorial Epidemiologists and we make a recommendation for diseases we think should be nationally notifiable diseases,’ Dr Chiller says.

‘But at the end of the day, we’re a republic, the states rule and they decide what’s reportable.’

If states don’t require their hospitals to report cases the fungal infection, the CDC may be severely underestimating the number of cases across the country.

‘It’s a bit of an uphill battle and it needs to be a really concerted effort on multiple tiers of the health care system,’ Dr Chiller says.

‘This is just the newest example’ of drug resistant bugs, says Dr Chiller, adding that although it is not identical to drug resistant bacteria, coming together to stem Candida auris’s spread is ‘a good way to re-educate providers that these things can and will emerge, and it reinforces the importance of infection control techniques to try to keep these patients safer and reduce transmission.

‘We need to stay on top of it and not let our guard down.’

My mile high mayhem! A young flight attendant in the Eighties reveals how she saw it all - so fasten your seatbelts for a rollicking ride...

How to trap mice with cooking oil and noodles?

President Rouhani: Iran will not negotiate under US pressure

The 20 happiest states in the US

New York: new secret weapon in the war on rats