Cultural journey on the Prasae river

From its upper part to its estuary, this watercourse in Rayong’s Klaeng district holds many gems for travellers to discover.

It was early in the afternoon. The Sun was high in the sky, blasting down rays so scorching as if they were meant to kill. But in the winding narrow river along which our boat was leisurely cruising, the ambience was pleasant, thanks to the light yet refreshing breeze, and the thick greenery along both banks that provided comfortable shade.

Apart from the water-dragon-watching boat tour, in Krasae Bon the community can teach you about rice farming and growing fruit trees, as well as how to prepare local snacks. Wat Krasae Khuha Sawan, the…

Oh, and I think the grilled river prawns, and many other home-made yummies the villagers had prepared for us to enjoy at lunchtime before sending everybody into the boat, also played a great role in helping us ignore the Sun’s daunting effect.

The purpose of our short after-meal voyage on this upper part of Prasae River in Klaeng, Rayong province, was not merely to soak in the view. We were in pursuit of a reptile.

Every minute, everybody needed to concentrate, our eyes scanning the waterside for lang, a kind of green lizard known as trakong, the Chinese water dragon that can grow to over a metre in length. These days, the species (Physignathus cocincinus) is no longer common in the wild. This section of Prasae River is one of the few places still home to non-captive lang.

The purpose of our hunt was to sight-see and take photos of the beautiful lizards, not to catch them. The locals of the Krasae Bon community, which this part of the river runs through, have been working hard to conserve the species and its habitat, which the people themselves also call home. A few years ago, these villagers staged strong protests against a plan to build a biomass power plant in their rural neighbourhood. Their love for the environment is not to be challenged.

That afternoon, during the hour-long boat tour, we found three langs. Their green bodies made it difficult for untrained eyes to spot them among the vegetation. But the boatman, who doubled as a guide,could precisely locate the water dragon from afar. “Over there, on the bamboo!” he shouted. However, none of us was able to see the reptile until minutes later, when the boat was less than 2m from the bank where it was resting. On its low perch, the creature seemed vigilant but never budged. According to the boatman, if the fellow really felt threatened, it would flee by jumping into the water and quickly dive out of sight.

This northern part of Prasae River, Klaeng’s most important waterway, is purely freshwater. Unlike its mouth several kilometres downstream, which I had visited a few times before people living in this area are farmers, tending orchards where mangosteen, durian and various other fruit trees and edible plants are grown. They see tourism as a way to make their story known to outsiders and a way to safeguard the community from future development that could threaten their environment and quality of life.

Thanks to guidance from the Designated Areas for Sustainable Tourism Administration (Dasta) and the Thai Ecotourism and Adventure Travel Association (Teata), with advance notice the community can plan and arrange tours and activities for visiting groups. The lang-watching boat trip is one of them, and is highly recommended. 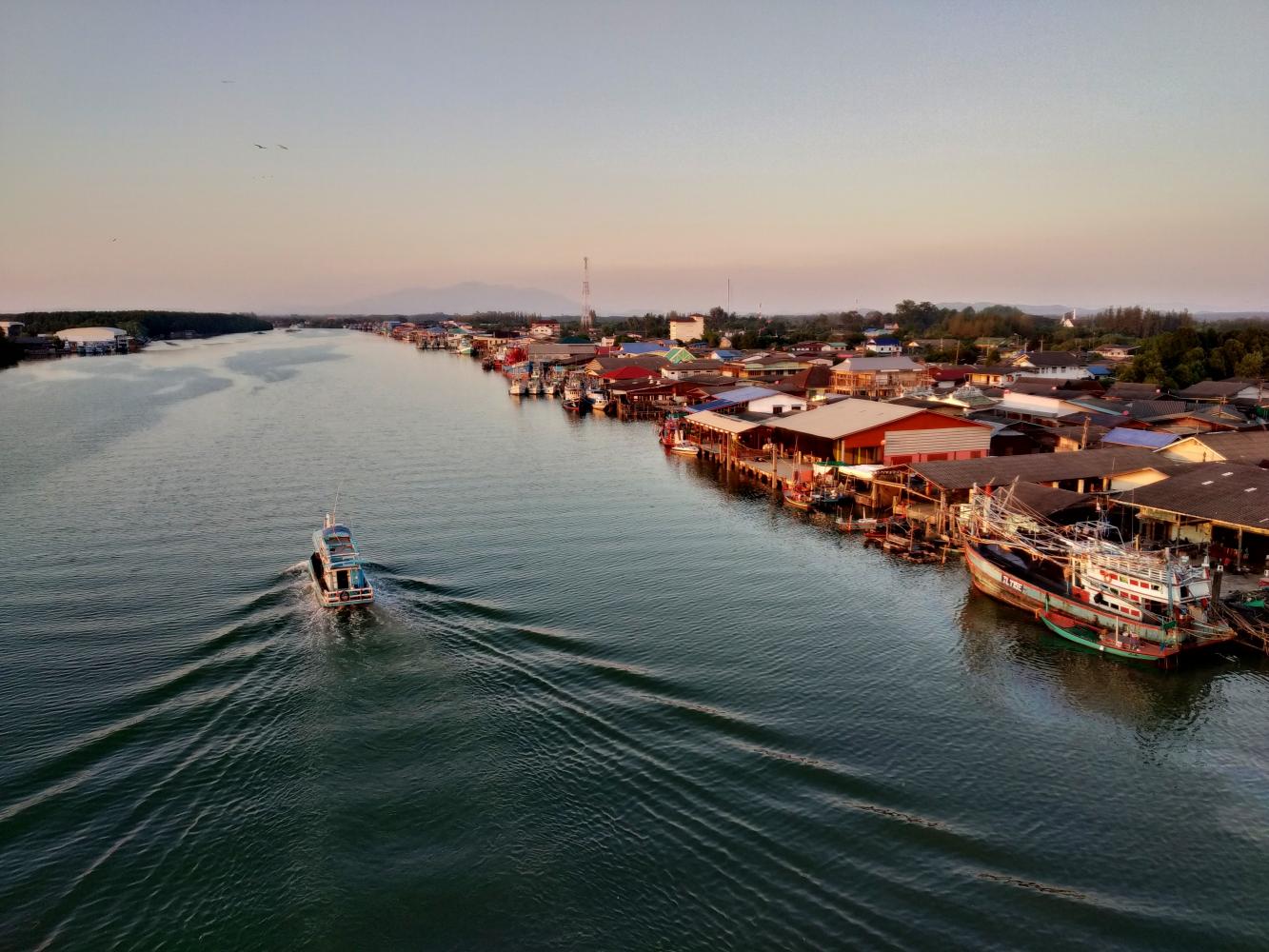 The lower end of Prasae River, viewed from Prasae Sin Bridge in the upstream direction, is several times wider than its upper part. The town of Pak Nam Prasae sits peacefully on its east bank. Pongpet Mekloy

The two agencies also provide support to a tourism group in Ban Chamrung, another community in the district. But unlike in Krasae Bon, the people of Ban Chamrung and surrounding villages have been active in community-based tourism years before the concept became popular.

At the lower end of the Prasae River — the point where it meets the sea — lies Pak Nam Prasae, where the livelihood of the locals is significantly different from Ban Krasae Bon and Ban Chamrung. The once-bustling fishing port at the mouth of this river of Klaeng district is a famous destination among Thai tourists, especially those of the social-media generation. The area may not have the water dragon but it boasts a town full of decades- or even century-old wooden architecture, where descendants of the original owners still live. Natural and historical sites in and around the community make a visit here an even more enriching experience. 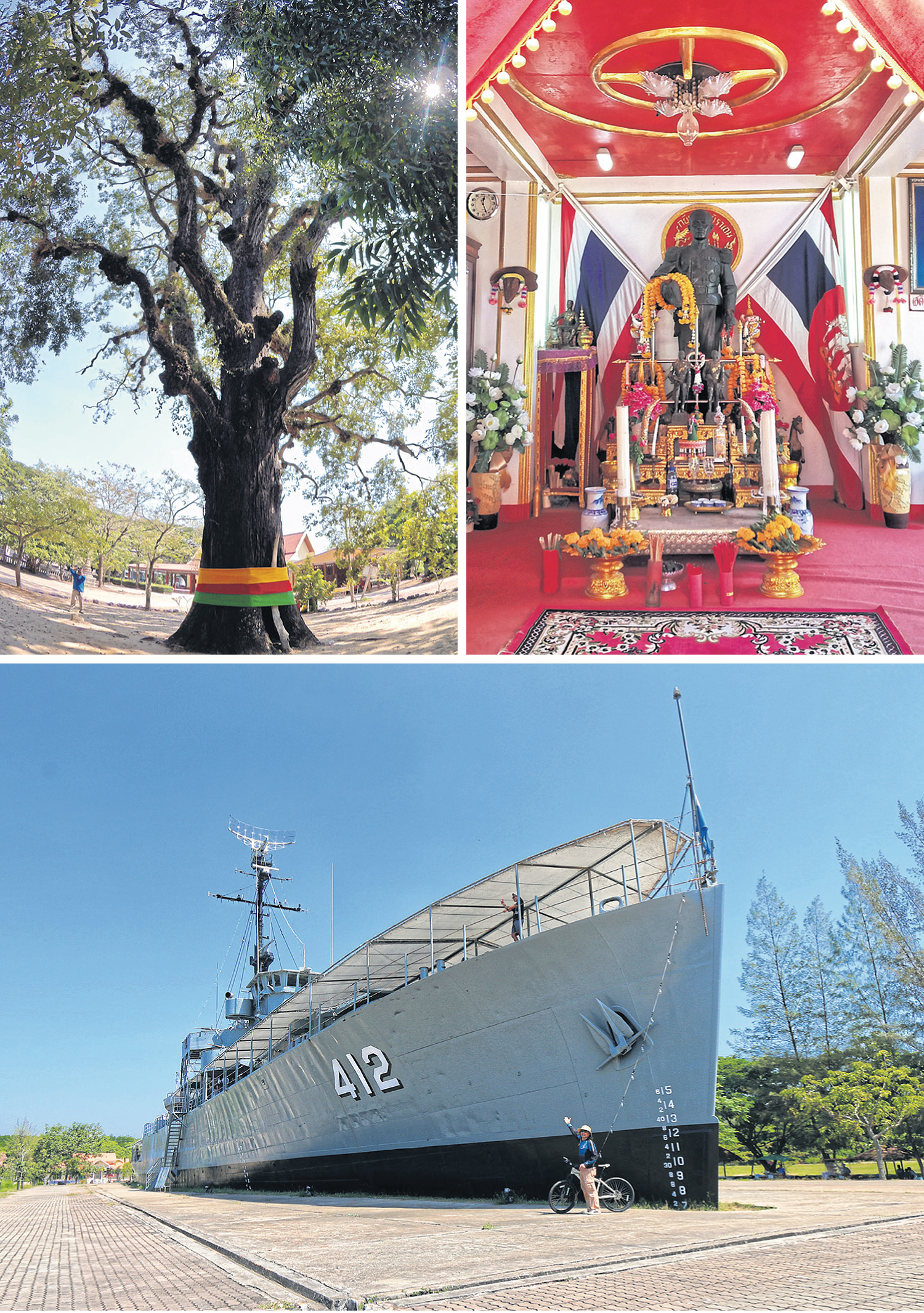 Besides the nostalgic atmosphere of the town and the beautiful mangrove of Thung Prong Thong, Pak Nam Prasae has other places of interest. Among them are the monument of the HTMS Prasae, one of the Thai battleships that took part in the Korean War in the early 1950s; the shrine of the widely revered Prince of Chumphon, the Father of the Thai Navy; and Wat Takhian Ngam, named after the two massive takhian trees (Hopea odorata) that stand on the temple grounds. 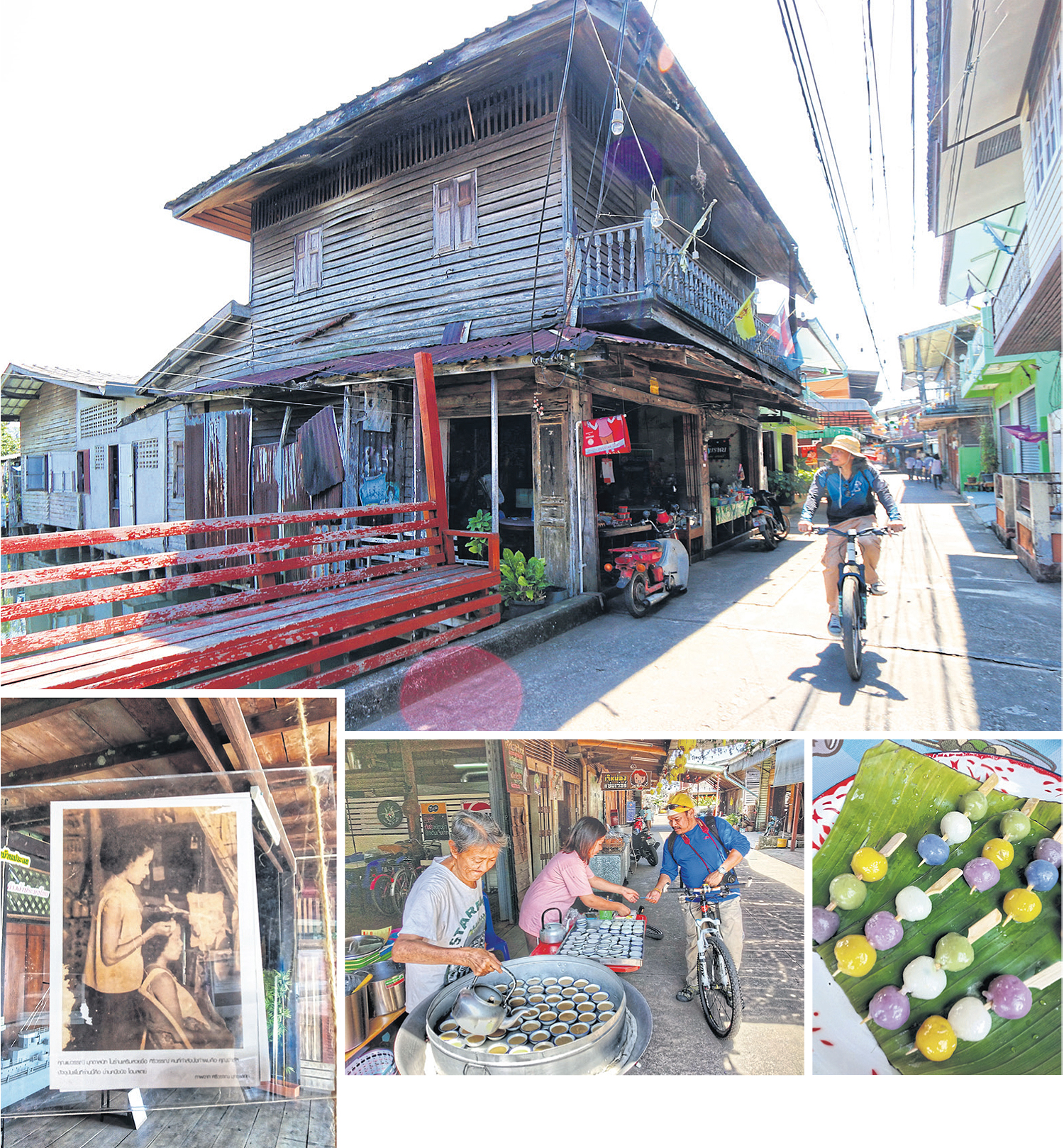 In the old town of Pak Nam Prasae, you will find a long lane flanked by old wooden shophouses. Those on the west side extend to the river, where large fishing boats are moored. The community may no longer be as busy as it used to be decades ago, before Highway 3 (Sukhumvit) was built, but it is still alive. Apart from the fishery, several small businesses, from old-school coffee shops to tailor shops, still thrive. Some families open their homes to sell home-made local goodies. One of the oldest houses has been converted into a museum, with many old photographs on display. The pictures depict the livelihoods of local people in decades gone by. Fascinatingly, things have not changed much here compared with other urban areas. 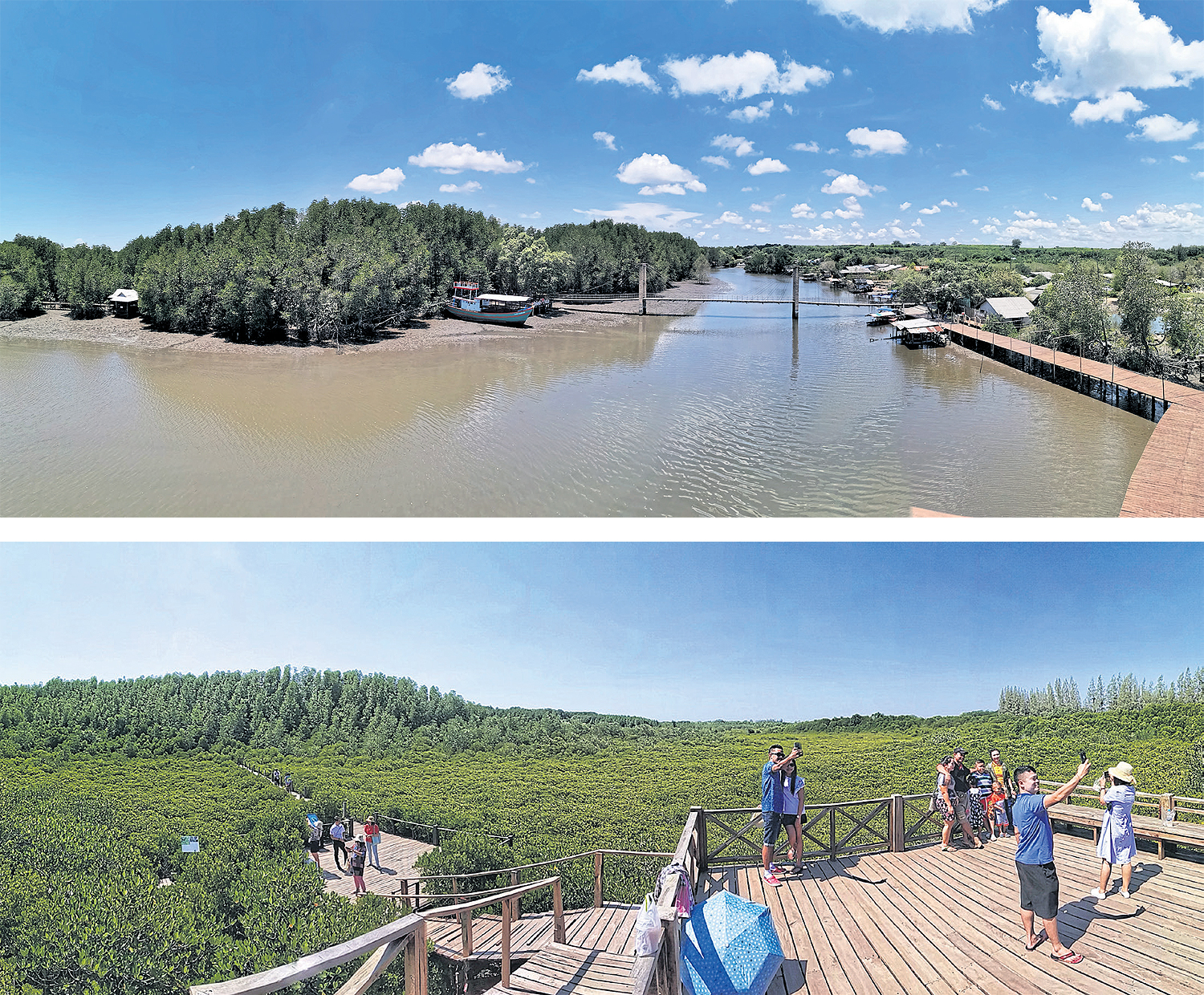 Two mangrove sites are popular attractions of Klaeng district. One is Thung Prong Thong and the other, Saphan Rak Samae, named after the suspension bridge that leads to it. The first is close to the Pak Nam Prasae community east of the river, while the latter is usually included in the tours of Ban Chamrung on the west side of the river. 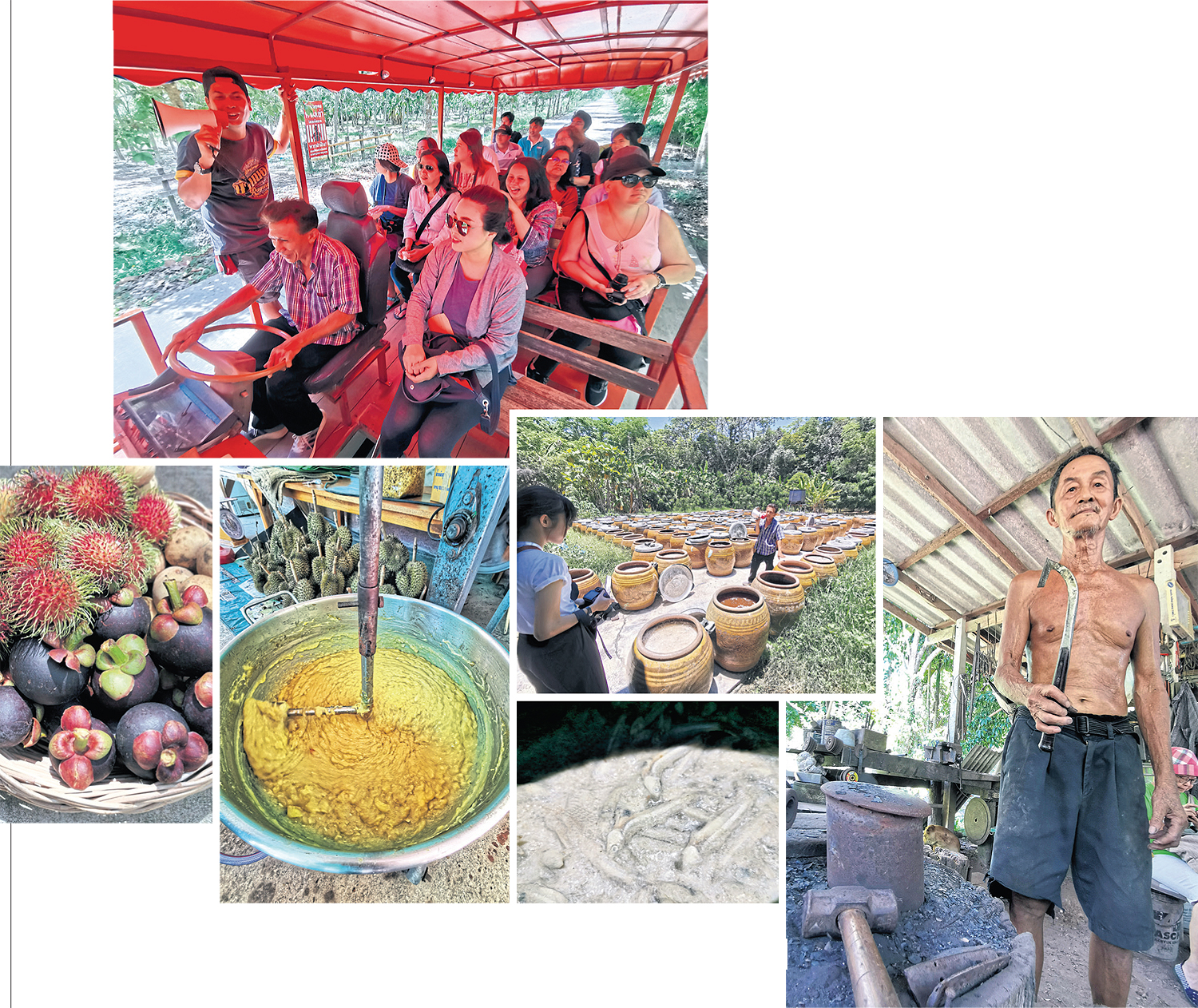 At Ban Chamrung, you can take a guided tour of the community and its neighbouring areas. Along the way, the tour will drop you at fruit orchards and some of the villagers’ many workshops, each specialising in a different activity. On the afternoon I was there, I got to visit a family that produces fish sauce, a blacksmith who makes knives for workers in rubber-tree plantations, a fruit orchard ,and places where the villagers make durian paste (thurian kuan) and fried durian chips. Homestays are available for those who wish to see and learn more. 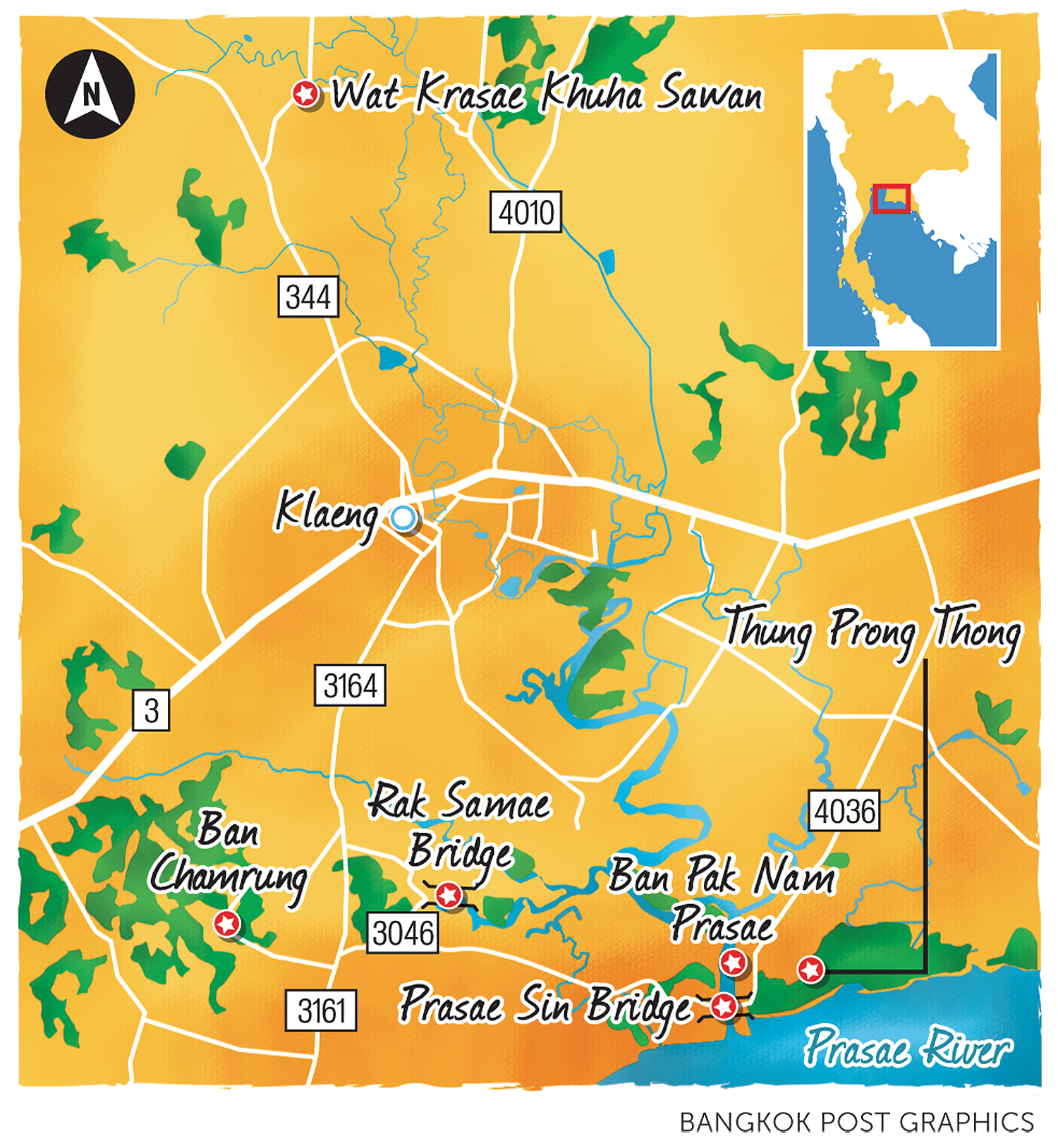 Terrible moments of truck and roll!!

An Giang: Highway was landslided into river